The simply named Michigan lottery is unique in the American lottery scene, since it is primarily an online lottery game. The basic idea of the lottery is the raise funds to support the school system in the state. The lottery officially began way back in 1975, before they took to terminals in 1977. Michigan participates in the Powerball and Mega Millions lottos, but it also runs its own lottery, known as the Classic Lotto 47.

How does the Michigan Lottery work? 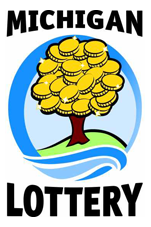 Played twice per week, Michigan’s Classic Lotto 47 generally has considerably smaller jackpots than the two national games, usually around several million dollars in cash. However, the Michigan lottery has far fewer players participating in it.

Players must choose 6 numbers from a pool of 47. Jackpots start at $1 million, and players need to match all 6 numbers to win the jackpot prize.

Curiously enough, this lottery game does not feature a random ball machine, but instead uses RNGs (random number generators) to choose the winning numbers.

Players are guaranteed to win whatever jackpot is on offer if they match all six numbers. It cannot be worth less than $1 million. Landing 5 numbers in the Michigan lottery can players scoop a guaranteed $2,500 cash prize. $100 is prize for matching four numbers, whilst matching 3 offers up a $5 prize. There are no prizes for correctly predicting two or less numbers, and no bonus balls are used in this lottery game.

Players can choose to bag their winnings in cash if they wish. If they choose to do so, the total amount won will be worth half the advertised jackpot amount. Alternatively, players can claim the whole amount but spread over 30 years as an annual pay-out.

At present, the biggest ever jackpot win on this lottery was the $23.5 million won on March 1, 2008. On average, players tend to win around $3.97 million with this lottery game. A minimum of $1 million has been paid out 64 times at the time of writing, with the last $1 million win occurring on March 8. In total, over 1,246 jackpots have been paid out since the inception of the Michigan lottery game.

If the Michigan lottery (Classic Lotto 47) doesn’t tick your boxes, you can always try your luck on the Mega Millions or Powerball lottos, which are also offered in the state. However, whilst both the Mega Millions and Powerball lottos may be similar to each other, they are vastly different from the Classic Lotto 47 game. There are no bonus balls, this lottery is run digitally, the lotto is only played in Michigan, and the chances of winning are far greater (even if the prize is smaller) with the Michigan lottery.

As well as the main lottery game, the Michigan lottery also runs several state-only draw games, and these include Club Keno, scratch cards, Daily 3 and Daily 4, as well as Fantasy 5 games.

Because the Michigan lottery uses a digital only system, players are entitled to buy tickets to the Classic Lotto 47 online. Players must first sign up with the website and become a Players Club member. From there, they can snap up tickets to the lottery game. However, due to the lottery only being run in the state, it seldom appears at other major worldwide lottery ticket sales websites.